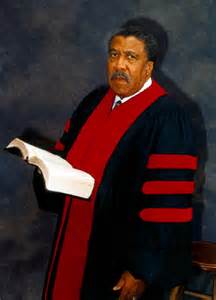 Pastor Clay Evans birth and founded the “Ship” aka Fellowship Missionary Baptist Church on 45th Princeton here in Chicago  in 1958. Becoming very organized in his gifts and many talents.

He also became a Civil Rights Leader, in 1965 joining Jesse Jackson Sr.  which in turns were the founders of  Operation Push in 1971. Pastor Evans, came under heavy scrutiny for allowing Dr. Martin Luther King in his pulpit by the late former Mayor Richard Daley Sr.

To much of his credits … he moved Chicago’s people of color along.  He established strong political  and religious weight. 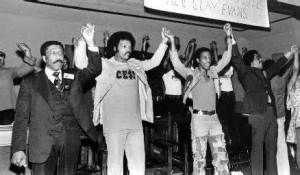 In  1975, became the President, of  Broadcast Ministers Alliance. Leading the charge in Broadcasting in radio and television. Who could forget the most popular choir in America? Who didn’t love Dr. Clay’s raspy and melodious voice.

In 1995, winning a Gospel  Stellar Award” for I’VE GOT A TESTIMONY…

In 2000, Reverend Clay Evans pass the baton after 42 years  in ministry. He was honored here in Illinois by Senator Dick Durban for his years of service to contribute to his gift of building our lives and communities. 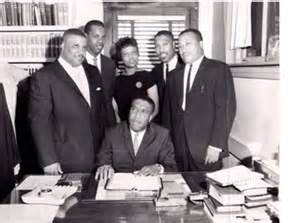 I recently saw Dr. Clay Evans at the Nations of Islam, 85th Year Saviour’s Day 2015. It  brought tears to my ears and it warm my heart even more that he was surrounded by many spiritual sons in his latter years,  who embraced him as a General, Leather, Father, and Mentor…Although, he needed assistance his voice still carried with strength and coherent.

My family came out of the roots of Dr. Clay Evans. My grandparents were first  members of Fellowship Missionary Baptist Church before moving to the outskirts of the city. Often times many forget who were the hind legs and pillars  in Chicago’s  without hidden agendas.

Dr. Clay Evans doesn’t have to flex his muscles anywhere  because his heart was in God’s people and the people was very much aware of it! There was never any question of where his heart was.

Dr. Clay Evans is very much still in it!

What a better way to honor someone who is well-loved and respected!