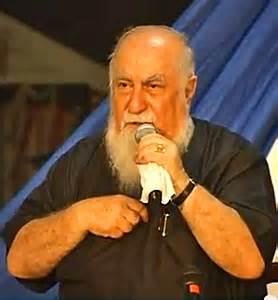 Someone,  I learned from and  I well respect in the Prophetic ministry… and the Commission on this man’s life.

Dr. Samuel Doctorian… Is Armenian, …An absolutely brilliant man of God born, in Beruit. Called as Priest and Prophet…

He saw the judgment of God after visiting the Isle of Patmos.  His testimony is simply outstanding!

His experience while in the presence of God…”detailed” the attack in New York, September 11, 2001… before that dreadful day and the days to future event.

After what he shared many people thought he was mentally ill… but he wasn’t!  He shared future events … of the last days of this world…

After 9/11…He was one of the well sought “speaker’… After what he left on record before the attack on this country! What God showed him… was coming to pass and it was then, and only then… people had began to believe what he experience was more than a miracle of God…He revealed it to this 11th Hour “Seer”.

Many have ostracized  and misunderstood his ministry … but unfortunately often times God really can’t be explained but experienced. We have more people who attend a “religious service” still lack unbelief when it comes to  God and the supernatural!

In due season..God always vindicate his “PROPHETS”… before the naysayers!

What I have found out was  of the many deceits of satan is to keep the people in ignorance… There a lot of people afraid of God…. and they are afraid of people who have a closer relationship with God. So there fear people who demonstrate his power…. You know why? The power of God in others reflect what many are lacking.  Oh, yeah… God is kept on a tight script in most churches today… And look around who much power do you see…When you find people with the power of God… we are lonely people by man’s standards… People are either afraid of you,,.. and or jealous of you!

All because one can’t believe in the supernatural is does exist!  Many will pay for their palms to be read than just believing in God. I am not  just speaking about non-Christians but also those who “claim” to know God.  When the world can’t grasp the things of the “Spirit”… they want what makes sense!  In these last days…God is showing us many things to come… It’s not up to a Prophet(ess) to bring  conversion…

All we have to do is speak the truth of God without wavering. We have our critics and its often times it’s the people who say they know God… People can’t believe because of the lack of unbelief within our own.

Dr. Doctorian… experience something that was mind-blowing for the masses who opt on prophetic teaching, prayer and intercession… These were actual recorded event before ….9/11… I repeat before 9/11….

If you think what he is saying is too much for you… wait until the coming days…Many fear the unknown because they are not prepared… It’s easy to call someone a fake… especially when many are deceived in believing … I spend very little time selling God… I am his walking billboard. Telling God’s people what “Thus Saith, The Lord”… is no sweat off of us, especially when we have become aware of God’s truth!

God wouldn’t  keep his people without warning and revelation!  What  this man saw is worth reading about and studying what God is showing in the coming days of tribulations! Go here….www.revlu.com/5angels.htm